RSS
← Sadie’s Room Redo
A Day with the Kanes →

After playing with and marveling at Ehlayna and Ethan’s homemade marble run, Elijah has been intense about constructing our own. With some recycling and time on our hands, we went to town. 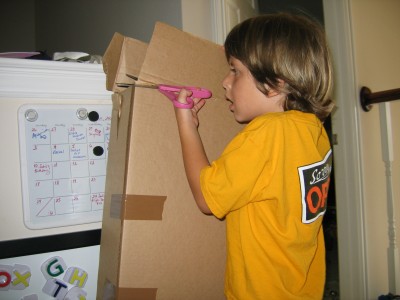 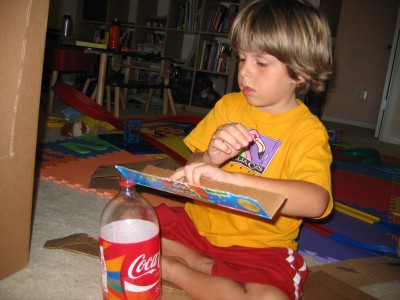 Elijah did a lot of preliminary testing. The long-term planning piece was a little much for him and the possibilities were so endless that it was a bit overwhelming. He definitely knew he wanted two launchings at the top. There was the ongoing discussion of whether they should mimic each other or be entirely different and whether they should converge at any point. He finally decided to make two runs exactly the same that would end in the juice bottle at the bottom. It was a little tricky figuring a way that the juice bottle could be extracted once all the marbles had been used so that we could get them back but we did it! 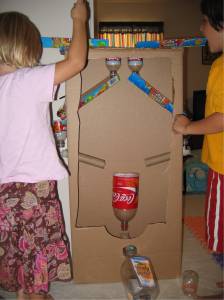 Here it is! I have video but it’s one of those tip your head or computer sideways because I love the long angle shots 🙂 I’ll get one another time but here’s how it goes. The marble goes down the first ramp and into the little water bottle, then down a speedy ramp that leads to the outside of the box where it hits a bell and goes back into the box via a tube, it shoots out of the tube and into the Coke bottle where it whirls round and round and finally goes out the top of the Coke bottle, into a funnel, and through a tube into the juice bottle which hangs out of the front of the box. This thing is so fun, I drop a marble in almost every time I walk by.

Posted by Sarah on August 14, 2008 in Uncategorized

← Sadie’s Room Redo
A Day with the Kanes →